Living in Tromsø in Northern Norway, I have a lot of experience with the northern lights. So it’s no surprise that my inbox is always flooding with messages from people wanting to plan northern lights trips to Norway.

And that’s for good reason too – I can’t think of many experiences I’ve had that have been more magical than watching the northern lights dance above me. They’re definitely worth the time, expense, and cold to see them at least once in a lifetime. And if you want to see the aurora Norway is the place to go! 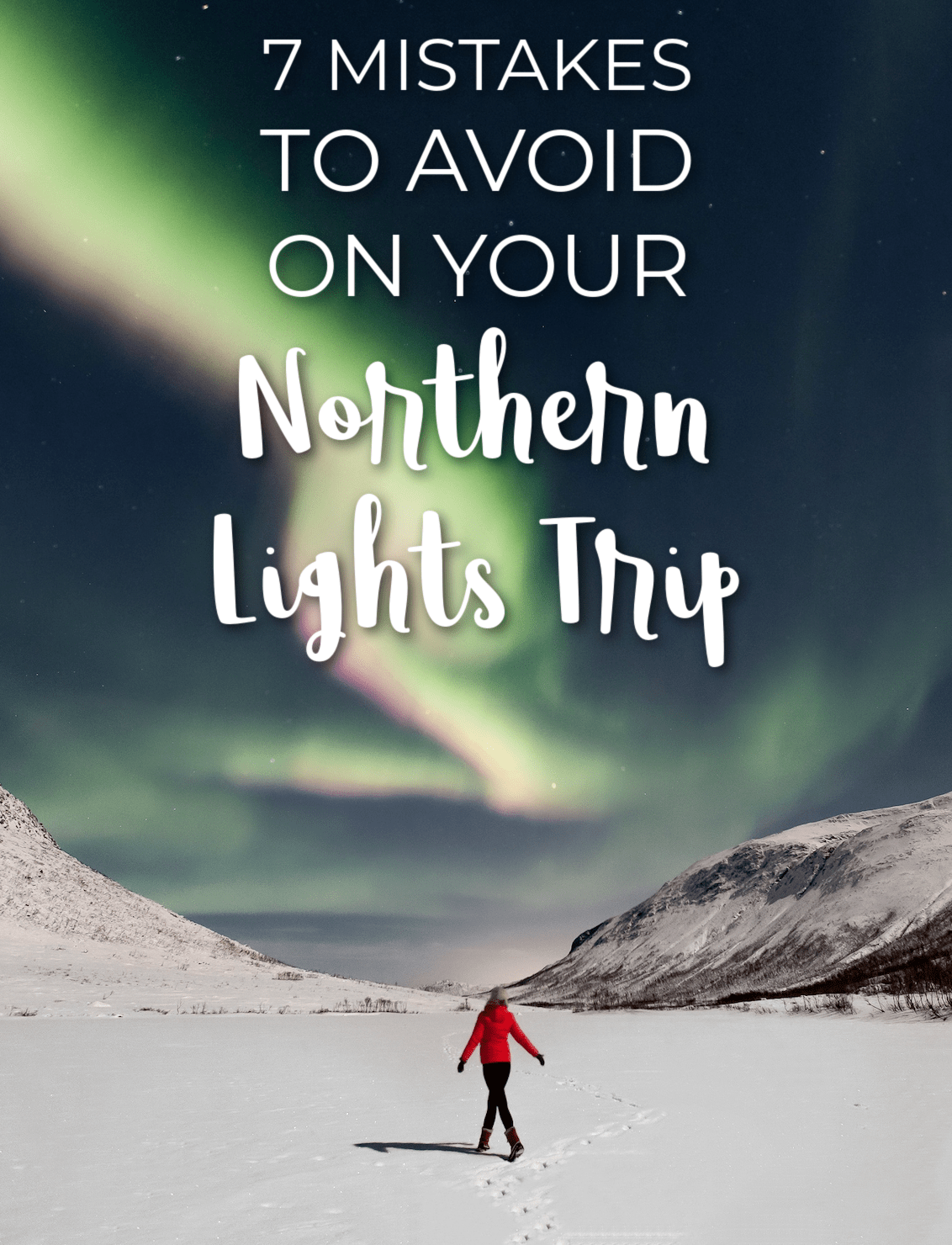 I can’t tell you how many emails I’ve gotten from people telling me they’ve planned a trip to Oslo and/or Bergen this winter to see the fjords and northern lights.

I think because Norway has a small population people can forget that the country is actually huge! Or rather, really, really long. So all the gorgeous northern lights photos you see from Norway do not mean that you can see those views from anywhere in the country – you’re going to need to at least head north of the Arctic Circle for a good chance of seeing them.

And no, Trondheim is not far enough north. I feel like that misconception is partially my fault, as I wrote about seeing an amazing display of northern lights shortly after moving to Trondheim, but it’s actually quite rare to get to see the northern lights in Trondheim.

And I’m not the only one who’s excitedly shared northern lights photos from places that rarely get glimpses of them – you’ll see plenty of photos out there of the northern lights dancing over famous locations in southern Norway, but know that that is not the norm.

Even the local tourism board in my old town in the south loved to run an Instagram advert of a photo of the northern lights over Rauland, but the truth is I never saw them once in the three years I lived there. But now that I live in Tromsø in Northern Norway I usually see the northern lights a couple times a week in the winter.

So head north! Because yes, if you want to see the northern lights, Norway is a good place to visit, but only if you’re far enough North. If you want a good chance of seeing the northern lights, you’ll want to go at least as far north as Bodø, and heading all the way up to Tromsø or Alta would give you even better chances.

Also, be aware that the Arctic Circle is quite a long journey from Oslo or Bergen – Bodø is a 16+ hour drive from Oslo or a 19-hour train ride. So if you’re on a tight schedule but have your heart set on seeing the aurora borealis in Norway it might be best to fly!

Visiting for too short a time

As I already mentioned, the Arctic Circle is really far from Oslo and Bergen, so make sure to factor time in your trip to actually get up there. There are plenty of cheap flights north, or you could take the train to Bodø (or through Sweden to Narvik), but the train line doesn’t go all the way up to Tromsø.

And you’ll also want to stay as long as possible in the north so that you actually get a chance to see the northern lights! The lights themselves are unpredictable, but the biggest challenge you’ll face when trying to see them is probably the weather.

Ideally, you’ll want to have time to either wait out bad weather or get away from it. I would try to at least have 4 days in the north (though I spent 7 days in Lofoten and never saw them).

Not packing the right clothing

Hanging out outside on a dark winter’s night is not always the most pleasant experience, but you just know that as soon as you go inside to warm up the aurora will make a quick appearance!

So it’s best to be prepared to wait out in the cold. I’ve written a guide to what to pack for winter in Norway, but basically, I would say the most important thing of all is to have warm footwear (I personally love my Sorel boots).

Okay, so most people know that they shouldn’t plan their northern lights trip for the middle of summer when the sun never sets, but believe it or not, the best time to see northern lights in Norway is not necessarily the darkest time of the year.

The weather in November, December and January can be brutal, so a lot of people say that the best months to see the northern lights in Norway are late September, October, late January, February, and March. Of course, that’s just a suggestion, as the weather here will always be unpredictable, but if you want to optimize your chances I’d say that’s the best time to visit Norway for northern lights.

Also, with the way the aurora oval is positioned, generally you’ll have the highest chance of seeing the northern lights at night. I usually always see them after at least 6 pm. So visiting Norway in December when it’s dark all day won’t necessarily increase your chances, as it’s not that likely you’ll see the northern lights at 3 in the afternoon anyway.

Not booking a Northern Lights tour

Oh my goodness, I’ve heard so much confusion over whether or not to book a northern lights tour!

Do you need to take a tour to see the northern lights?

Should you book a tour for every night you’re in the north?

What kind of Norway aurora tour should you book?

And the questions go on.

First of all, if the aurora is dancing brightly you’ll be able to see it even from a city center (plus you’ll always be able to get away from bright lights in Norwegian cities by heading to the parks). So if the weather and aurora forecast are good, you might not need to take a tour to see the northern lights.

But it’s still a very good idea to sign up for a northern lights tour.

Northern lights tours also usually provide thermal winter suits for you to wear, which is super helpful when you’ll be outside in the cold. And of course it’s so helpful to have a guide watching for the lights, so that you can warm up inside a tent or tour bus when you get cold, without missing the aurora if it does appear.

I’ve also shared my top northern lights tour recommendations for Tromsø here. And I have a guide for Tromsø in winter here.

And if you want to know the best northern lights tours in Norway, Sweden, Finland, and Iceland, I’ve included my recommendations in my northern lights ebook. And I’ve also laid out a guide for how to chase the northern lights independently, including my favorite weather app and my two favorite northern lights forecast apps, as well as exactly how I use them. You can buy the book here, and since you’re coming from my blog you can also get a 20% discount with the code 20below, which brings the total down to $5.

on my Svalbard northern lights tour

Norway is an excellent place to see the northern lights. Living in Tromsø I often see them a couple of times a week in the winter. You can read my guide to the best northern lights hotels in Norway here.

However don’t forget that you can also see the northern lights in Sweden and Finland, which are also really fun winter destinations!

In Sweden I always recommend Abisko or Kiruna for the northern lights. Abisko is particularly great because due to its location between a lake and mountains, the clouds have a tendency of pulling apart, if perhaps just briefly, even during the worst of weather.

I saw this lights display in the middle of a snowstorm in Abisko (which is why I wasn’t waiting somewhere more photogenic than the bus depot where my friend’s camper was parked):

Abisko is also a really good budget option for seeing the lights. You can get either a sleeping berth on a train or a flight from Stockholm for around $100 one-way, there are hostel options in Abisko, and there are so few lights in Abisko that you won’t need to take a tour to see the aurora. Plus Sweden is just generally cheaper than Norway.

I’ve written a complete post on how to plan a northern lights trip to Abisko on a budget here.

Or if you can’t find good accommodation in Abisko, I absolutely LOVED my stay at this husky lodge in Kiruna, where you can stay with huskies!

And then in Finland I recommend going to Saariselkä or Rovaniemi. The great thing about Finland is that they have so many glass igloo type resorts where you can sleep under a glass ceiling where you can spot the northern lights from the comfort of your bed!

at the Northern Lights Village in Saariselkä

Of course, the downside of planning a northern lights trip to Sweden or Finland instead of Norway is that they are simply not as lovely as Norway. Places like Tromsø and Lofoten are going to blow your mind regardless of whether you see the northern lights.

I recently spent four days on Senja and Dyrøy, which are near Tromsø, and it was seriously one of the best trips of my life, regardless of the northern lights. But I was lucky and actually ended up seeing the northern lights every night!

I can highly recommend both places for a northern lights trip, especially as they’re away from city lights like Tromsø, and generally have better weather than Lofoten. Read about Senja here, and read about Dyrøy here.

Or you could visit both Sweden and Norway! You can get the train from Abisko to Narvik in Norway, and then get a bus from Narvik to Senja, Dyrøy, Lofoten or Tromsø if you want!

I recently did a trip like this that included Abisko, Kiruna, Narvik, Vesterålen, and Lofoten. You can see my exact one week itinerary for arctic Norway and Sweden here.

Not planning other activities and excursions

If you don’t want to set yourself up for disappointment, please, please don’t make your trip solely about seeing the northern lights!

Instead try to fill your days with other fun activities so that even if you have terrible luck with the northern lights you’ll still have had an amazing time.

The Arctic has so much more to offer than the Aurora, so take advantage of being up there! Personally I love dogsledding, reindeer excursions, and whale watching. 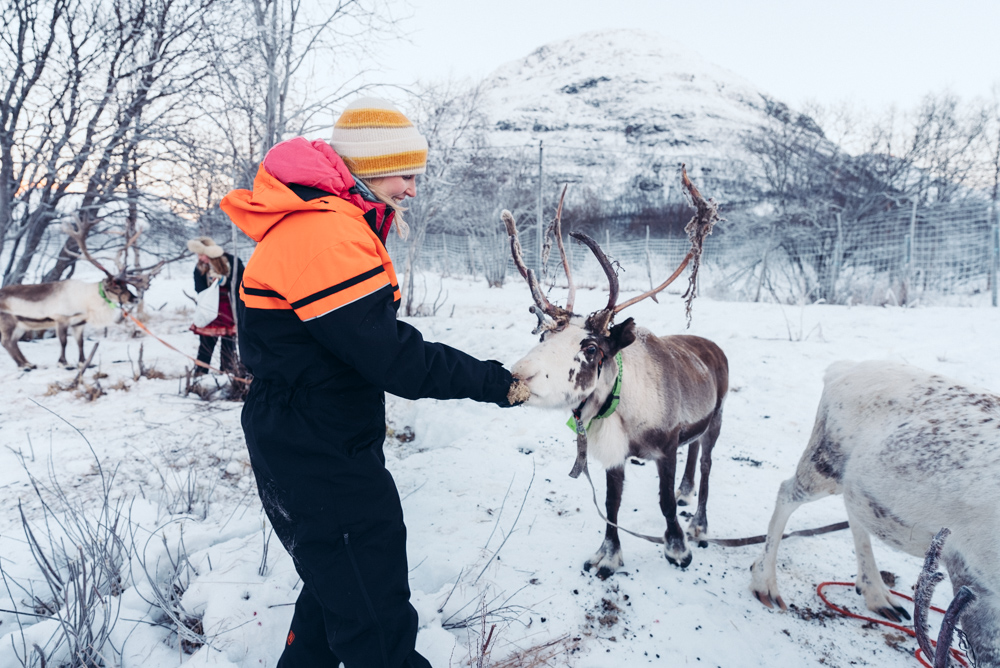 5.1K shares
Previous Post: « The Best Places to See Northern Lights in Norway, Sweden & Finland
Next Post: Things To Do in Abisko, Sweden (When Not Seeing the Northern Lights) »