If you’re dreaming of South Africa but feel unsure about planning a trip there, my dear friend Helen runs the most incredible group trips to Africa, including one to South Africa! I went on her two week trip to Uganda, Mozambique, and the Congo and it was seriously one of the best trips of my life, so I know you will love traveling with her and her team. Her Mozambique, Eswatini and South Africa tour looks incredible, and helped inspire my own trip to this part of the world.

When we planned our South Africa/Mozambique trip Danielle and I wanted to have as much time as possible in Mozambique, while still seeing a bit of South Africa. So after consulting all the travel blogs (and I really mean all of them) we decided to spend the bulk of our South Africa time in Cape Town, and only one full day in Johannesburg.

Everyone said Joburg was boring, but since our flight to Maputo left from Joburg we figured we could at least add an extra two nights there, after our five nights in Cape Town.

But in the end I way preferred Joburg to Cape Town, and if I could do it all over again I would have only spent two or three nights in Cape Town and the rest in Joburg. If only I had known!

I think one of the reasons I ended up preferring Joburg was that we stayed in a more lively area of the city, so it had a really nice energy. We stayed at Curiocity Backpackers, again in a private room so that we could have the social experience of a hostel with a bit more privacy and comfort than staying in a dorm room.

Curiocity runs a lot of day tours around Joburg, which seemed popular even with people who weren’t actually staying at the hostel, so there were always a lot of people coming and going and in the evenings the bar area was always full of people.

But we didn’t actually do any of the hostel tours. Instead we booked this 5-hour day tour with a local guide through Airbnb. I always forget that Airbnb offers experiences as well as lodging, and it seemed like a good way to connect with a local for a less formal excursion than going with a tour company.

Before meeting up with our guide Sibusiso, we first spent the morning at the Apartheid Museum, which was pretty much everyone’s #1 recommendation for what to do while in Johannesburg. And I can see why – the museum took us through South Africa’s history through apartheid and up to the present in a surprisingly quick amount of time.

The Apartheid Museum was about a fifteen minute Uber ride from our hostel. We spent about two hours at the museum and while we definitely could have stayed longer, I did feel like I left with a much better understanding of South Africa’s history.

I did find the museum a little confusing to navigate, but then upon leaving I noticed that the museum guide that came with my ticket included a map for how to go through the museum depending on how many hours you have to spend there, which was very handy. If only I were better at actually looking at brochures!

And then from the museum we caught another Uber to Soweto to meet up with Sibusiso.

If like us you don’t intend to buy a South African sim card, be aware that the Apartheid Museum doesn’t have WiFi. But we were able to walk over to the amusement park parking lot next door to use their WiFi – if you ask the guards at the museum they should point you in the right direction.

While I probably would have felt more comfortable exploring Soweto on my own, just because that’s how I like to travel, it was nice to get to know Sibusiso and ask him all of our questions about growing up in Joburg and what life is like here. Spending the day with him certainly helped us to get a feel for Joburg in the short amount of time we had in the city.

We went through the main historic sites of Soweto like Nelson Mandela’s house and the Hector Pieterson monument and museum, as well as stopping for a local kota burger and then later a beer tasting at Soweto Gold as well as a local beer shop.

Then we caught a local minivan bus across Soweto to the Bara market and ended in Kliptown, where Sibusiso’s friend took over the guiding, as he lives in this area. 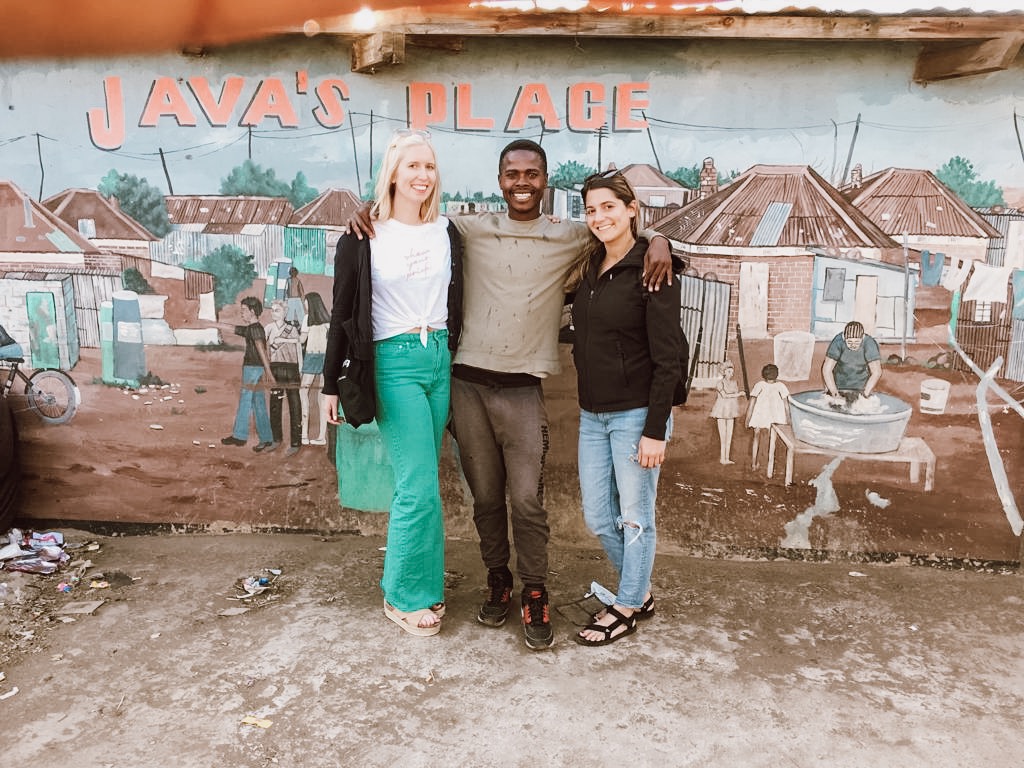 And then we headed back to our hostel to find some dinner.

We actually ate dinner at the same restaurant both of our nights in Johannesburg, and it wasn’t even South African food. But it was so good! We ate at Habesha, down the street from our hostel, and it was some of the best Ethiopian food I’ve ever had. So we returned the next night and ordered the same exact thing (the beyaynetu).

And unfortunately that was the end of our time in Joburg. Like I said, if I were to do it again I definitely would opt for more time in Joburg than Cape Town, but almost every traveler I met in South Africa said they preferred Cape Town, so I guess it really just depends on what you’re looking for.

Personally I felt like Joburg gave me a better feel for South African culture, and I simply liked the vibe of the city more. It seemed more lively, energetic and chaotic, which I always enjoy in a city. Cape Town is very beautiful and has some lovely spots, but often I felt a bit like I could have been somewhere in Europe instead of South Africa.

Come to think of it, someone said that Cape Town feels more European while Joburg feels more American, so maybe despite all my claims to being Norwegian I’m really American at heart.

But the best part of our trip was definitely still ahead of us: Mozambique!